According to Dr. Patrick E. McGovern, the Scientific Director of the Biomolecular Archaeology Laboratory for Cuisine, Fermented Beverages and Health at the University of Pennsylvania Museum in Philadelphia and to Dr. José Vouillamoz from University of Neuchâtel in Switzerland who specializes in the study of the origin and parentage of grape varieties through DNA typing (or genetic fingerprinting); they both show the South East part of Turkey as the origin of grape seeds and grape domestication dating back to 9.000 BC.

“From the Bronze Age to Antiquity”

The first traces of viticulture and winemaking in Anatolia date back 7,000 years. Wine had an indispensable role in the social lives of the oldest civilizations of Anatolia the Hattis and the Hittites. It was the primary libation offered to the gods during rituals attended by royalty and high governors. Provisions protecting viticulture in Hittite law, and the custom of celebrating each vintage with a holiday, suggest that wine was important to both ancient economies and ancient cultural practices

For the Phrygians, who lived in Anatolia after the Hittites, wine was an essential part of daily life and an important element in their diet along with olive oil, fish, and bread. The Phrygians introduced wine to Greek colonists on Anatolia’s western flank, and by the 6th century BC wine was being exported as far as France and Italy from trading and production centres such as Tabae (Tavas, near the present-day Pamukkale) and Klazomenai (near Urla) both in the southern Aegean region and Ainos (Enez) to the north. Knidos (today’s Datça), on the southwest Mediterranean coast, and the island of Rhodes were also leading centres for the wine trade. One of these early Anatolian grapes, Misket, became known as Muscat in Europe. Another variety from Smyrna (today’s Izmir), was used in the production of the famous wine of Pramnios, which is mentioned in Homer’s Iliad.

Anatolia (Todays Turkey) is known as the birth place of grapes and wine. The history of wine making in Anatolia goes back about 7,000 years to the Hattians and Hittites, the oldest civilizations in the area, where wine had an essential role in social life. It was also the prime libation to the gods, and laws protecting viticulture as well as festivals celebrating each vintage express the importance of wine. During the Ottoman era, wine production was carried out exclusively by the empire’s non-Muslim minorities, including Greeks and Armenians, while official prohibitions on the use and sale of alcohol made consumption difficult. However, because the tax collected from wine was a source of income for the Empire, the laws were loosened sporadically. 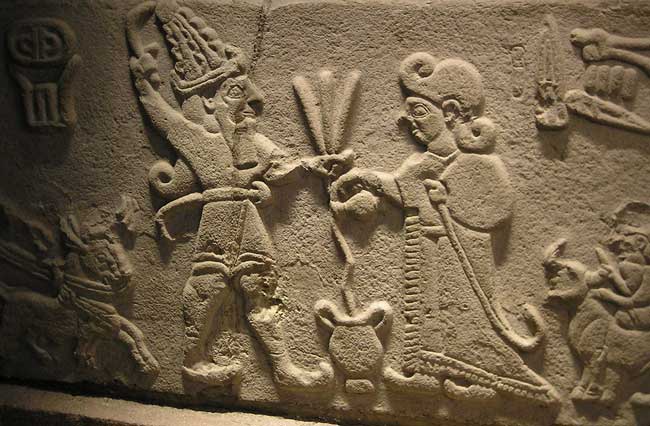 “From the Ottoman Empireto the Turkish Republic”

Later still, Turkish tribes arrived in Anatolia from Central Asia and they, too, drank wine. Production continued even after Islam began to dominate the region, and a comfortable balance developed between Christian and Muslim residents: Christians, for the most part, produced the wine; both Christians and Muslims consumed it. During the long period of the Ottoman Empire (1299–1923), wine production and trade were carried out exclusively by non-Muslim minorities (Greeks, Armenians, Syrians, and others). However, what we today would call wine-bars, usually in Christian neighborhoods, were also patronized by Muslims.

During the Ottoman period, the general atmosphere of tolerance was interrupted from time to time by official prohibitions on the use and sale of alcohol. Winebars were forced to close and heavy sanctions, even death penalties, were applied to those who didn’t obey the new rules. The prohibitions were always short-lived, however each time they would be first loosened, then eventually lifted completely. This regular reversal of policy had an economic reason: the tax collected from wine sales was an important source of income for the Ottoman treasury, so any longterm banning of alcohol sales contradicted state interests. Even during periods of prohibition, vineyards were never uprooted: grape production was simply diverted to other types of consumption. A ready supply of grapes enabled wine production to recover rapidly after each hiatus.

Wine production reached record levels and alcohol prohibitions ceased during the second half of the 19th century, in the atmosphere of tolerance and freedom brought about by the Ottoman modernization movement. At the same time European vineyards were being devastated by an epidemic of phylloxera (a vine-attacking insect), reducing wine production dramatically. In order to meet the resulting surge in European demand, the Ottoman Empire’s wine exports increased substantially reaching 340 million litres in 1904.

There was a considerable amount of wine production before World War I and the War of Independence in Turkey. But wars affected production negatively, especially in the Thrace and Aegean regions.

The production of all alcoholic beverages went under the control of government monopoly in 1927, with the exception of wine, for which private production and the development of vineyards was still permitted. This was specifically done to develop and protect wine production. The only restriction, which in today’s terms could be called “controlled wine regions-appellation controllée”, was the permissions given to wine production on specific regions where wine grapes were being produced. In 1928 the government began to support wine producers with technical knowhow and semi-financial support. (There was also support for export tax exemptions and a support fee/kg).

The 1950’s government initiated French grape varieties for plantation in the Aegean and Thrace regions (Semillon, Clairette, Sylvaner, Gamay, Cinsaut, Pinot Noir and Cabernet Sauvignon are among the varieties planted and explored during these dates).

The subsequent decrease in quality began with the non-implementation of this “controlled wine regions” regulation as well as political changes in the 1960’s. Private producers stayed in the market throughout this period, but remained relatively small in size.

By the late 1980s, as the Turkish economy began to integrate with other global economies and deregulation became more prevalent, the tourism sector also began to develop, thus substantially boosting wine sales. This was the impetus for the wineries to invest in the latest technology, machineries, to develop their wineries, begin investment in their vineyards and plant international and local grape varieties to international quality standards.

Today only around five per cent of the indigenous grapes, which have made Turkey a world leader, are used to produce wine, also several Turkish wine production companies take on the mission to reintroduce and export native Anatolian grapes. Even so, Turkey’s well known and boutique vineyards deserve recognition for the excellent wine they produce from local and international grape varieties, using high standard modern production methods, Turkish wines are embarking on a major quality and variety revolution tapping into indigenous grapes from ancient soils.

FROM WILD VINES TO MODERN WINES

Turkey has an exciting geography for wine makers, from the Mediterranean climates dominant in the Thrace and Aegean regions, to the high plateaus and continental climate of Central and Eastern Anatolia. Vineyards across Turkey are blessed with abundant sunlight, with the added bonus of great temperature fluctuation between day and night at higher altitudes.The very first domestication of the wild Eurasian grape Vitis vinifera in southeastern Anatolia is dated sometime between 8,500 and 5,000 BC.

Turkey’s most popular white-wine grape varieties are Emir, Narince, Sultaniye, Yapıncak and Bornova Misketi, while the red-wine grapes are Çalkarası, Kalecik Karası, Karasakız, Papaskarası, Öküzgözü and Boğazkere. With most of Anatolia prime for wine production (including South-Eastern, Mid-Eastern, Mid-Northern, and Mid-Southern Anatolia) vineyards by the Mediterranean, Aegean, and Marmara seas are also popular for their juicy grapes. The most productive area is, however, by the Aegean Sea, with the towns of İzmir, Çanakkale, Manisa, and Denizli known for wine production. It is also here that the island of Bozcaada offers one of the most beautiful places to travel for a taste of island life as well as excellent wines. 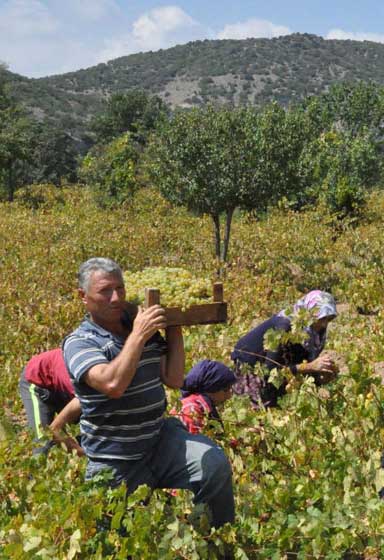 Today Facts and Figures about the Turkish Wine Market

With a newfound interest in wine production and some fascinating recent discoveries by adventurous winemakers, it is probable that there are a good number of wine grapes that are yet to be detected in the region. Let’s take a closer look at some of the most popular varieties.

Botanists estimate that there are around 600-1,200 indigenous grape varieties in Turkey, of which only around 60 are cultivated commercially. Turkey ranks 6th in the world for grape production with 4.264.000 tonnes produced annually and is the 4th largest grape growing area with 505.000 ha after Spain, France and Italy. In Turkey around 2% of total grape production is used for wine making and most grapes are either eaten fresh as fruit, or dried for both the domestic and international market. Wine consumption per capita is around 1 litre per annum.

Turkey’s Wine Production is around 75 million litres per year. Wine exports constitute %4 of total production and by volume is 2.7 million litres and by value € 7.200.000.

We use cookies on our website to give you the most relevant experience by remembering your preferences and repeat visits. By clicking “Accept”, you consent to the use of ALL the cookies.
Cookie settingsACCEPT
Manage consent

This website uses cookies to improve your experience while you navigate through the website. Out of these, the cookies that are categorized as necessary are stored on your browser as they are essential for the working of basic functionalities of the website. We also use third-party cookies that help us analyze and understand how you use this website. These cookies will be stored in your browser only with your consent. You also have the option to opt-out of these cookies. But opting out of some of these cookies may affect your browsing experience.
Necessary Always Enabled

Performance cookies are used to understand and analyze the key performance indexes of the website which helps in delivering a better user experience for the visitors.

Analytical cookies are used to understand how visitors interact with the website. These cookies help provide information on metrics the number of visitors, bounce rate, traffic source, etc.

Advertisement cookies are used to provide visitors with relevant ads and marketing campaigns. These cookies track visitors across websites and collect information to provide customized ads.

Other uncategorized cookies are those that are being analyzed and have not been classified into a category as yet.

SAVE & ACCEPT
Powered by

Javascript not detected. Javascript required for this site to function. Please enable it in your browser settings and refresh this page.

Be the first to know! We will inform you when the product arrives in stock. Please leave your valid email address below.